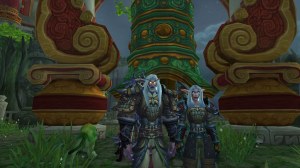 Kae stretched luxuriously under the furs that covered the bed and realized that Kal was actually up before she was.  She could smell the delicious food cooking in the kitchen and she laughed softly as she heard Kal talking to their pets.  Oh yes, they were both in the doorway of the kitchen because when Kal was doing the cooking, they always got extra treats, he spoiled them terribly.

The rain had started late last night with the usual light show.  The lightning dancing among the clouds was always a sight that she and Kal enjoyed when they weren’t out in the weather too.  No, last night they had returned from one of their scouting missions and after reporting in, they had headed back to the farm.

Kae toyed with her hair as she lay there and thought about how the things had changed with Kal. It was all good in her opinion and yes, she realized that they were just starting this part of the relationship; however, she was planning on savoring every minute of it.

She also knew that some of her co-workers at the Sentinel camp resented the fact that she and Kal had such a lovely place to hide out when they were away from camp, oh well, Kal had worked very hard to make the farm successful. She knew that he had been ostracized quite a bit when he was in camp and to make up for being as lonely as he was, he would go work on the farm and of course, she would go with him as any other scouting partner might have done.  The relationship had started growing then, they became best friends.

Apparently Kal had been pretty busy already, which meant that he had been up since before dawn again, writing in his journal or just sitting on the steps and drinking that coffee that he liked – he was more like his Father than he even realized sometimes.  At least he hadn’t gotten the addiction for those cigarettes though, he only smoked once in a while and said that the taste was good, however, he though it gave him a headache along with the liquor that he would consume at the same time.

Oh, she could smell the eggs cooking, the bacon smelled a tad bit burnt, which meant that Kal had gotten distracted with something else.  She didn’t understand how he could burn half the bacon because his mind was wandering, however, that’s one of the faults she hoped to correct in the future. She had just started to rise from the bed to retrieve the robe hanging on the screen that blocked the milky light coming through the doorway when Kal stuck his head around the screen and almost scared her out of her wits.

“Kal!! You didn’t need to scare me like that.  At least I’m wide awake now, “said Kae as she chuckled and winked at her companion.  Kal just grinned and winked back as he started around the screen with a tray full of the morning fare.

“No need to get up.  I thought we’d just share breakfast in bed together since it’s pouring down rain and we will be stuck inside until that stops,” replied Kal with a huge grin on his face.  “Besides, we have both earned a day of rest even if it means that we still have to go take care of the laundry later.”

They both sat in the bed on top of the furs and started eating leisurely as their two cats looked on with hungry eyes. Kae was thinking to herself that this is how it might be for years to come, however, it was still a new thing for the two of them.  This new closeness was something that they had both fought against for a very long time, however, now those things had changed; it seemed to be the right thing to do.

Their scouting mission hadn’t been in the normal area that they had been sent lately, which kind of surprised the two of them; however, going back to the Jade Forest wasn’t all that bad because it was one area of Pandaria that they both loved.  It had never lost that magic feel to it nor had it lost that feeling that of mystery.  How many other things might they discover at some future date when the mists were still lingering over much of the forest there?

Yes, there seemed to be more Horde in the forest than usual, however, that was not a huge surprise to either one of them because they had all heard that Hellscream appeared to have gone completely out of his mind and was searching for more weapons of the Mogu.  Kal’s knowledge of Orcish due to his family was a definite plus for them because they could get close enough to some of the camps to overhear some of the troops talking without being discovered.  They had been able to glean quite a bit of information this last trip – the new people coming in didn’t realize that the trees had ears that they could overhear their conversations. At least they knew that more Horde were on the way and had an idea of how many would be coming, just not the exact date, something about next week.

This information was received very well by the commanders in the camp when they returned.  Kae was more than a little bit concerned when she realized that some of those people from Stormwind, you know the ones that like to spy, were looking at the two of them as if they had sprouted wings. Kal seemed unconcerned when he was asked how he had learned Orcish and he replied that he had been raised in Shattrath, which, though true, was hedging the truth a bit.   Naturally, the Commander spoke up and announced that Kal was a half-breed and that his Father was Sindorei which gave the Stormwind people more things to discuss after the two of them had been dismissed summarily.

Kae sat there laughing as they ate. He always ended up with more crumbs and other choice morsels in his beard sometimes and this morning was no different. She always wanted to ask him why he had grown the beard anyway because she thought he was quite handsome without it.

Nothing really seemed to matter this morning, they were both happy and they were both feeling comfortable in their new relationship.  This was still new and the start of something exciting. Neither one of them knew if things were going to be like this forever or not, however, they were going to take each day as it came.

This site uses Akismet to reduce spam. Learn how your comment data is processed.